Ignore Ferrari’s headline-setting pace for a moment. Although it is setting the pace on the timesheets in Barcelona F1 testing, rivals Mercedes are racking up the most miles.

At this stage of the Formula 1 season, everyone just wants to log laps as they gather precious data and correlate their new cars and power units with what their simulations have been telling them through the winter.

In an era where engine performance is king, this graphic is a stark reminder of who’s ruling the roost… 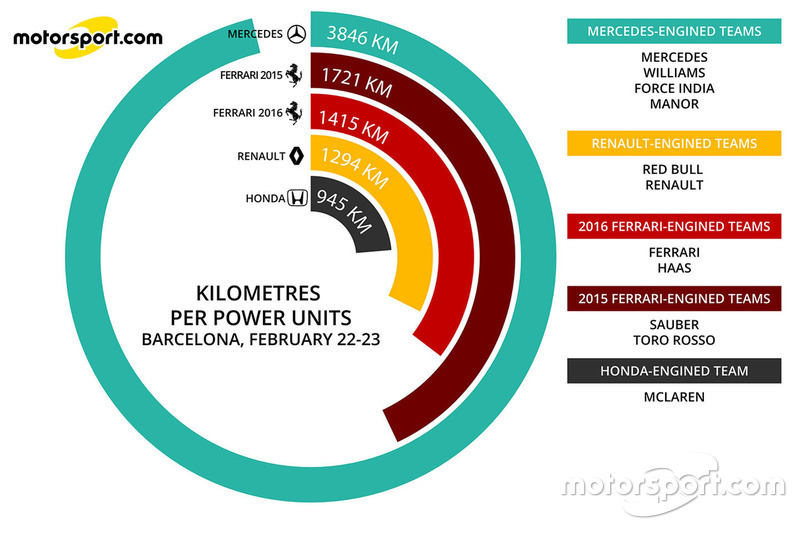 Even on the opening day, it was impossible to ignore the crushing display of reliability shown by Mercedes. By the end of Monday, Lewis Hamilton had completed 156 laps, compared with the 87 recorded by the next 2016 car, the Red Bull of Daniel Ricciardo.

As you can see below, the story continued on Tuesday, and it was even more impressive as Nico Rosberg ran 172 laps, or an astonishing 800.66kms.

The next highest total, 134, was also achieved by a Mercedes-powered car, namely the Williams of Valtteri Bottas.

Tonight in Spain, Paddy Lowe says he is targeting 180 laps on Wednesday… 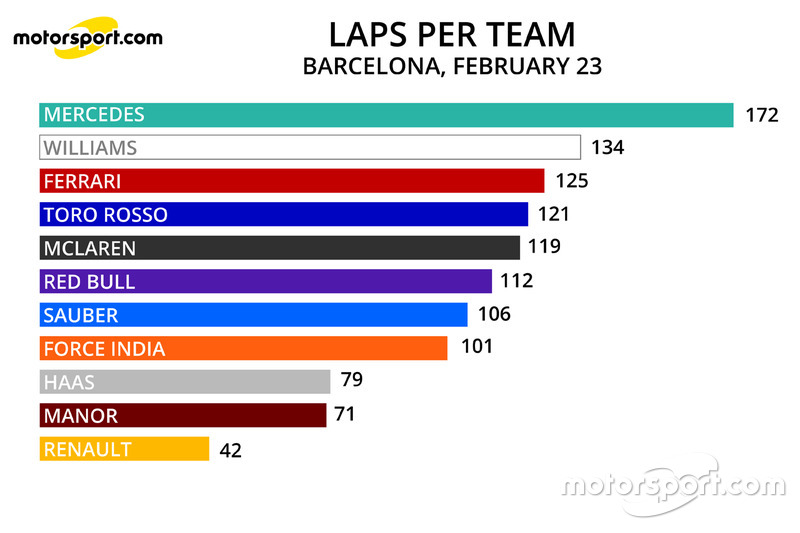 The Brackley-based team had the advantage of having already done a shakedown at Silverstone last week (sorry I mean ‘promotional event’), but then Williams and Ferrari had also done some early running at Barcelona, so that wasn’t the only reason why the team was able to record so many laps with such apparent ease.

“You shift your expectations and what you’re trying to achieve,” said Toto Wolff this week. “When it went so well like last year there is still room for progress.

“Our plan for today was to do lots of laps and lots of mileage, to collect data, and check various systems and correlation, before we head into the next phase, and this is performance, starting tomorrow [Tuesday] and after tomorrow. So the day really went well.

“We had the plan of clocking so many kilometres, and when we discussed it with Lewis and Nico before testing, and Paddy was saying we might be doing seven or eight or nine hundred kilometres a day, it was an ambitious target.

The rest of the article can be read HERE.